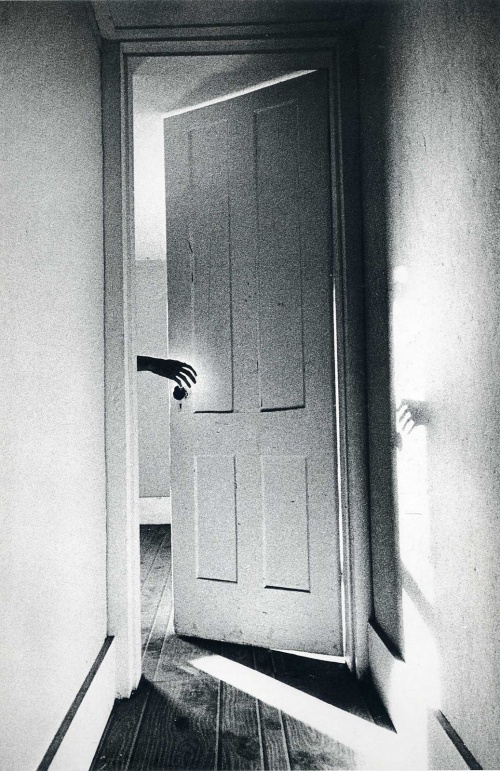 In life, you find yourself in a dark room from which you cannot see any way out. You are groping blindly along the walls, which are featureless and smooth. Finally, after what seems an eternity, you find in the dark a doorknob. When you turn it, a door opens, and you pass into another chamber, only to find that it, too, is perfectly dark and featureless. When you finally find another door, it opens into another dark chamber. And so it repeats, a blind stumbling, until one day, after a lifetime of searching, you open a door into a new place, one that is not dark, but perfectly, radiantly light. That last door is death. 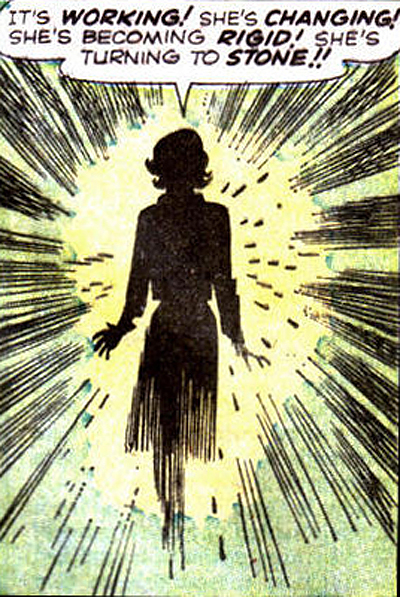 Breakfast this weekend with Duncan Kennedy….Here is a link (opens as a .pdf) to his famous article, “Legal Education as Training for Hierarchy.” In which there appears a paragraph that features the words ‘nonsense’ and ‘wrong’ a total of 10 separate times.

(Thanks to Monster Crazy for the graphic. Which appeared, I believe, via Pappy’s Golden Age. And is from an issue of Moomba, drawn by Jack Kirby and Dick Ayers.) 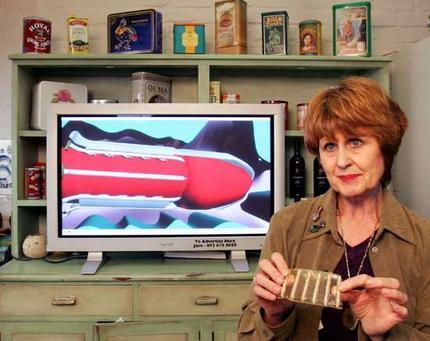 This morning’s coffee conversation centered on rape. In particular, mass rape as a tactic of war. Discussion veered toward rape prevention, rape counseling, the whole cultural constellation of psychologies, techniques and frameworks for processing rape, as individuals and in communities. I said something strident, something like, “If your program for dealing with rape does not include training in streetfighting for women, I am not listening to you.” And I’m not. There is an obvious response, readily at hand: prepare women for the possibility of rape. Prepare them by teaching them ‘effective negotiation.’ How to say ‘no.’ How to recognize when saying it isn’t going to suffice. How to make ‘no’ a reality: delivering a warning shot. And when a warning shot does not suffice, how to fight a rapist. How to fight with everything you’ve got. There are ways to reduce or eliminate the usual discrepancies in physical power between rapists and their targets. Eye-gouges, testicle attacks…use your imagination or your experience to illustrate. If you are training women in how to fight, I will listen to your therapeutic suggestions. If you’re not, then I respectfully decline to listen.

A woman in South Africa invented a device that is sold as a rape-preventative. It is worn in the vagina. It assaults any intruding penis with painful spikes. Now, I wouldn’t classify this as a preventative measure, rather, it is a punishment device. And punishment is an appropriate response to rape. On what moral grounds could one possibly deny that? 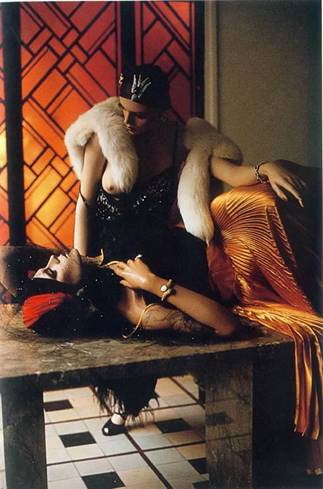 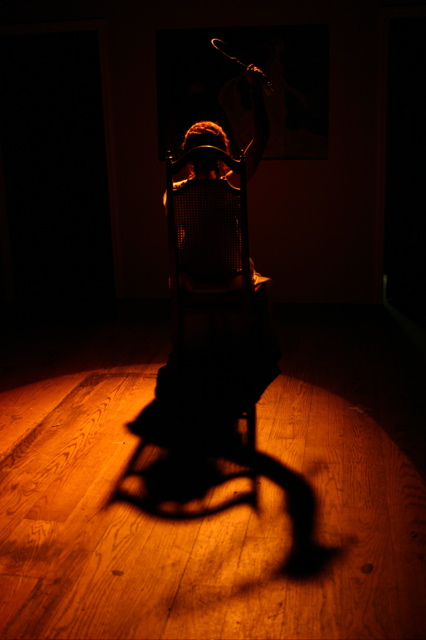 “Can there be any greater cruelty for a lover than the unfaithfulness of the woman he loves?”

“Indeed!” she replied. “We are faithful as long as we love, but you demand faithfulness of a woman without love, and the giving of herself without enjoyment. Who is cruel there – woman or man? You of the North in general take love too soberly and seriously. You talk of duties where there should only be a question of pleasure.”

“That is why our emotions are honorable and virtuous, and our relations permanent.”

“And yet a restless, always unsatisfied craving for the nudity of paganism,” she interrupted, “but that love, which is the highest joy, which is divine simplicity itself, is not for you moderns, you children of reflection. It works only evil in you. As soon as you wish to be natural, you become common. To you nature seems something hostile; you have made devils out of the smiling gods of Greece, and out of me a demon. You can only exorcise and curse me, or slay yourselved in bacchantic madness before my altar. And if ever one of you has had the courage to kiss my red mouth, he makes a barefoot pilgrimage to Rome in penitential robes and expects flowers to grow from his withered staff, while under my feet roses, violets, and myrtles spring up every hour, but their fragrance does not agree with you. Stay among your northern fogs and Christian incense; let us pagans remain under the debris, beneath the lava; do not disinter us. Pompeii was not built for you, nor our villas, our baths, our temples. You do not require gods. We are chilled in your world.”

The beautiful marble woman coughed, and drew the dark sables still closer about her shoulders. 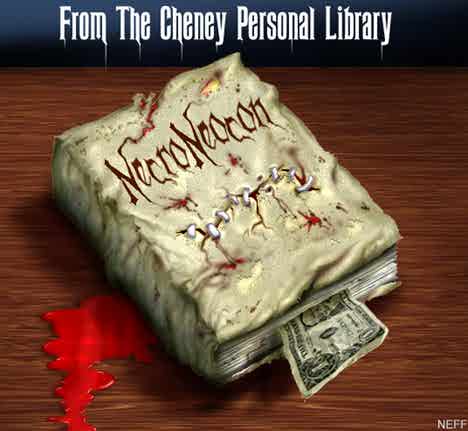 A useful collection of pages on the Necronomicon.

This is an issue I’ve been considering for many years. Since childhood, I always knew what I wanted to be when I grew up: I wanted to be COMPETENT. I recall taking a class trip to the city center with my preschool. I must have been 4 or 5 years old. My teacher was leading our group of children around the city, and he lost his way. He stopped to ask for directions on the street. The woman who gave him directions was wearing black leather boots, and was able to confidently explain where we should go. I don’t remember her face (I was probably too small to see it) but I distinctly remember her brisk and competent voice, and those daring black boots. THAT’S what I wanted to be: the kind of woman who gets asked for directions on the street, who wears black boots, who knows the city, and who can tell people what to do if they’re lost.

If success could be measured by adherence to childhood ideals, I would now be considered a fairly successful woman. (I also had a vague idea that I wanted to be an ‘artist,’ which seemed to involve lounging around on piles of opulent pillows in a room with no windows, smoking a long pipe, and drawing pictures of naked ladies. Apparently I suffered early exposure to the Baudelaire version of Romanticism.)

As I got older, my vision of competence expanded beyond the mere ability to give directions. I wanted to be a polymath, to master many skills: to be an excellent cook, a writer, a scholar, a streetfighter, to learn the essential post-apocalyptic survival skills such as gardening, firearms, vehicle maintenance, soapmaking….I wanted to read everything, to taste everything, to go everywhere. My vision of a well-rounded character often drove me into conflict with my schoolteachers, some of whom resisted the idea that a child could be drawing and listening to a maths lesson simultaneously. I eventually dropped out altogether, and only graduated high school through miraculous chance and the charity of Alternative Ed classes for adults. But when I skipped school, it was often so that I could go to the library, and accelerate the pace of my reading in an environment free from pesky, interfering teacher-types.

Hence, while I’ve aspired to be a polymath, I’ve also chosen the path of the autodidact. And the autodidact is in constant jeopardy of becoming a dilettante, a dabbler, jack-of-many-master-of-none. I definitely exhibit those traits: my knowledge of certain basic subjects, like US geography, is spotty at best, while I’ve indulged myself in deep pursuit of oddities, like alchemical history. I didn’t finish a bachelor’s degree until I was 31 years old, and was only a full-time student for one year, when I worked on my MA. Curiosity and energy have come naturally; discipline was harder to come by. And, of course, that battle is far from won. (As I write this, I’m extending the internal deadline I’d set for starting final preparations for my thesis defense. Should have started at 10, now it’s 11, maybe I can make it by noon…)

But while the battle is not won, it’s not lost, either. I’m not a master of anything, but in my first 32 years, I’ve built a solid foundation for becoming competent in a variety of disciplines. I was honored and moved to be described as “author, researcher, social worker, historian, lecturer, curator” in the tagline of my alumna profile:

And, although I can laugh ruefully at the ambitious goal I described in my college entry essay (“…to fully consider the upheavals and transformations of thought and order that have been occurring since World War I….”) I nonetheless feel a twinge of pride in the choice to set high standards for myself and my work.

As I make bumbling steps toward becoming a well-developed polymath (or intellectual polygamist!) I become more and more optimistic about the life of the generalist versus the specialist. I value ambidexterity, analysis, and inquisitiveness. And if I meet a bright young student, possessed of intellectual virtues but frustrated by the mindless routines of high school, I might just advise her to drop out, to take the path of greatest resistance and learn discipline rather than obedience. And, from time to time, I’ll let her borrow my black boots.